I'm sure all you dorks out there have seen the Cinefile Director's shirts. They are awesome. Look at this Ozu design. How can you not buy this? If you're me it's unpossible. I am beyond cuckoo for t-shirts. Lame hobby but I collect them and I'm always on the lookout for the next "Marty McFly IS Teen Wolf" tier shirt. There just aren't that many out there. I've totally silkscreened myself into a corner. Anyway, so I buy the damn shirt and then start to feel poser-y about it. I've seen like one Ozu film and I enjoyed it at the time(like 4 years ago) but never got back to his movies. I remember Allan Arkush coming into the video store where I was working at the time and talking about how great Tokyo Story was. I think he mentioned Open City being badass as well. I've seen neither but I will! Anyway, so I remembered Paul Schrader had written a book that was either all about Ozu or all about Bresson. Or maybe it was a two-fer and they were both in there. I just had heard he was a fan of Tokyo Story. I really gotta watch that. Like tonight. It sounds quite similar to a Leo McCarey film I once heard Scorsese mention in an interview(I always seem to tuck that kind of stuff away). It's called Make Way For Tomorrow and it took me forever to track down a copy cause it's available nowhere. Anyway the point of all this is that the shirt made me watch a few more Ozu films. They were totally amazing. I watched Early Summer and Late Spring. Quietly powerful and heartcrushing. Especially Late Spring. I can't say enough how much they really got to me. I wish I could muster up the attention to watch some Bela Tarr movies. Cause that shirt is faaantastic... 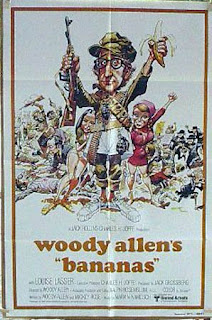 I was just enjoying some Roasted Plantain Chips from Trader Joes and I was thinking how could I tie this into a post about movies? At first I thought of Red Dust which I saw for the first time fairly recently. Good movie by the way. I thought I remembered it having bananas. But upon further investigation I was reminded it was a rubber plantation in Indochina. No bananas. Oddly enough I did just watch Woody Allen's Bananas again last night. Good stuff. Was interesting to see odd little touches that found their way into his later films. I do miss that silly Woody Allen of the early 70s. I really enjoy that Marx Brothers influenced almost French New Wave-y thing he seems to be doing. After seeing Scoop a while back I was saddened to see that Woody may never get back to the place with the funny. It's pretty obvious he lost it long ago. I just keep hoping I guess. Not that Bananas is a comic masterpiece, but it is quite enjoyable. The Hamlisch score is quite fun and I was able track it down thanks to this lovely interweb so that made me happy. I even love the Jack Davis art on the movie posters(also love the stuff he did for The Long Goodbye). I also somehow missed the baby carriage/Eisenstein reference till now.

So more banana movies. You've got Going Bananas with Dom Deluise and Jimmie Walker. This brought to you by director Boaz Davidson who also did the much much more enjoyable Last American Virgin (which stars the under-rated Lawrence Monoson and Diane Franklin who would go to star in Friday the 13th Part 4: The Final Chapter and Better off Dead respectively. Franklin would also end up in one of my picks for all time worst movie ever- TerrorVison). 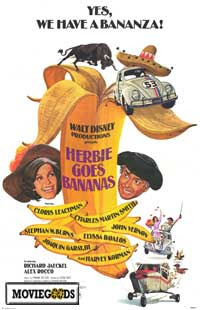 Moving on, you also have the obligatory Herbie Goes Bananas . What a cast! You've got Cloris Leachman, Charles Martin Smith, Alex Rocco and the late Harvey Korman! Which makes me also think of another Disney live actioner starring Kurt Russell, The Barefoot Executive. 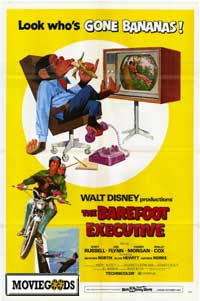 It's all about Russell's character coming across a chimp who can pick winning TV Shows. Russell made the film in the midst of his "Medfield College" Trilogy, right after The Computer Wore Tennis Shoes and before Now you See Him, Now You Don't. I always thought it was interesting that he made the Charles Whitman based TV-Movie The Deadly Tower (aka Sniper), the same year he ended that trilogy with The Strongest Man in the World.

Lastly, I guess there's also Hercules in New York (aka Hercules Goes Bananas) to be considered for the sake of our fair governor. 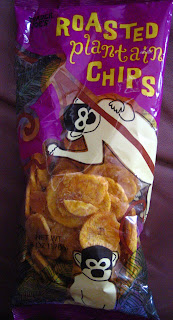 But anyway, back to these plantain chips. Damn they're tasty! Wish they were a little healthier. I mean, you wanna lie to yourself and say "oh well they're fruit so that's healthy right?". I just cannot get enough of them. I wish they made commercials for them cause I'd be in one! Here's a lovely review...
Rupert Pupkin at 12:18 PM 2 comments:
Share

Randomly I was set onto thinking about Dick York. I can't say where it began. I can never remember what gets my mind into Dick York mode. Regardless, I was reminded that I must reiterate here that I still find Dick York's Twilight Zone episode "A Penny For Your Thoughts" to be not only one of my favorite TWZ episodes but also, for my money, basically the best telepathy scenario there is. Granted there are plenty of books I haven't read that probably blow this scenario away with their sophisticated use of telepathy. But really I usually think of this and the much inferior but still funny scene in The Misadventures of Merlin Jones where Tommy Kirk is reading the minds of the other kids in the library. That scene is silly and I find it humorous, but "A Penny For Your Thoughts" just blows it away. I met George Clayton Johnson(the writer of said episode) years ago at a Twilight Zone convention. I don't remember what I said to him, but I know it couldn't have conveyed how much I like that episode and how great I think it is. I do remember meeting William Schallert (who I also think is awesome) and him being nonplussed by my saying I had been a fan of the Patty Duke show. I think he even rolled his eyes as I recall. Oh and I also met Kevin McCarthy there too. He was very cool. He had a pic of him with Steven Spielberg and Joe Dante on the set of Innerspace (I think). I have to find it. It was the three of them and on either side were some pods from the original Invasion of the Body Snatchers. I think he wrote "Check out these pods!" or something like that. Funny. Some young kid was hanging around his table and he asked the kid if he was gonna buy something (pictures etc he had there) or what. The kid said he didn't have any money and then McCarthy said (in this very RJ Fletcher kind of way) "Well then get the hell outta here!!". He immediately said he was kidding but he scared the kid and it was very humorous. Anyway, I got sidetracked there. The point is, Dick York rules telepathy as far as I'm concerned...
Rupert Pupkin at 5:43 PM 3 comments:
Share 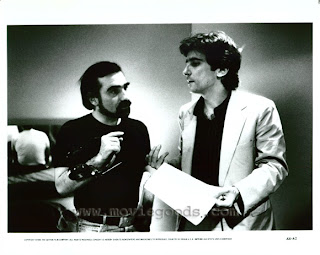 Was just watching Adventures in Babysitting on dvd the other night after having heard it mentioned on Mick Lasalle's podcast a few weeks back. Still enjoyable for what it is. And for me the best thing Chris Columbus has been involved in since The Goonies. This time around I noticed a quick appearance by Clark Johnson(was great in the Wire's final season as city editor Gus Haynes) as "Black Gang Leader" in the subway scene where Coogan gets a switchblade in the toe. You've also got Keith Coogan, Anthony Rapp, D'Onofrio, Bradley Whitford and John Ford Noonan (Tom's brother and you can see it). There really needs to be a Noonan brothers movie now that I'm thinking of it and Tom should direct. His wonderful film What Happened Was... still needs a dvd release! Anyway, I was watching Adventures in Babysitting and remembered how i'd seen it at a drive in theater in 1987 with a second movie that I can't recall. I was reminded of a few "crazy night" movies from the 1980s and how I kinda miss that genre. I know I'm blanking on some, but I always enjoyed The Night Before (directed and written by Thom Eberhardt, who also did the 80s cult classic Night of the Comet)with Lori Loughlin(of RAD and Secret Admirer fame) even with Keanu rolling in the lead. Then there was of course the best of all of them and one of my all time favorite movies, Scorsese's After Hours. What a movie. Even though I recently heard Joe Minion ripped off Joe Frank for part of the premise, it is still not tarnished for me. I recognize its' influence on a film like George Huang's Trojan War from about 10 years ago. So I mourn the loss of crazy night movies and I mourn the fact that I don't see Keith Coogan or Anthony Rapp in many movies these days. Rapp has already immortalized himself in Dazed and Confused, but I'd love to see him more. Saw Winter Passing a few years ago, which was certainly interesting. And as for Keith Coogan, man I miss this guy! Three films stand out-Babysitting, HIDING OUT, and BOOK OF LOVE(which though made in 1990-feels like an 80s movie). And of course we all remember his turn in DON'T TELL MOM THE BABYSITTER'S DEAD, with the immortal line "The dishes are done!!". Was just looking him up on imdb and noticed a TON of tv appearances. I think thats part of why he seems so prescient in other stuff. I swear I saw the episode of 21 Jump Street he was in. He was even in The Kid with the Broken Halo with Gary Coleman! Not sure where else I was going with this but I was getting all nostalgic again...
Rupert Pupkin at 3:44 PM 1 comment:
Share
‹
Home
View web version