This List brought to you by Cinema Du Meep, a blog I highly recommend! 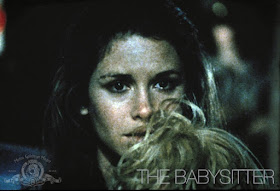 The Babysitter
Release Date: November 28th, 1980
This creepy Television movie was directed by Peter Medak (The Changeling) with a great cast: Patty Duke, William Shatner, John Houseman and Stephanie Zimbalist. There's definitely a pedigree here unlike other films shot for television of the time, and Medak makes the most out of it. This movie, a lot like The Changeling, is rich with atmosphere. Zimbalist is great in the title role. She's simultaneously bizarre and ravishing, and your eyes never leave her once she's on the screen. 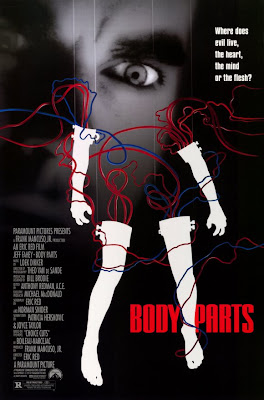 Body Parts
Release Date: August 2nd, 1991
Paramount pictures released Body Parts in theaters during the then dumping ground of August, and it went largely ignored. Director Eric Red (the screenwriter of The Hitcher) delivers a surprisingly bloody and lively movie here, and it really deserved much more attention than it got. It's entertaining, delivers the gore and chills and has a sense of humor. A Highlight includes the group of guys (one played with delirious panache by Brad Dourif) who received the body parts of an executed killer gathering together for some drinks and a good laugh about their peculiar bond with each other. 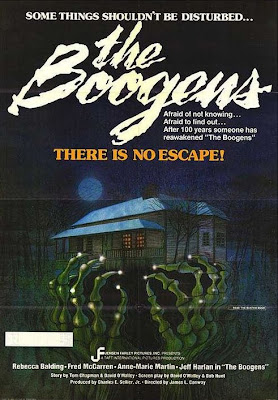 The Boogens
Release Date: September 25th, 1981
Ah, The Boogens. This is the little horror movie that could. Low-budgeted, shot in colorado, The Boogens is a movie that is usually well liked by those who do come across it. The actors are all charming and likable (Star Rebeca Balding is the epitome of plucky) and the film features one of the better animal actors I've seen... a poodle named Tiger. He's grrrreat! 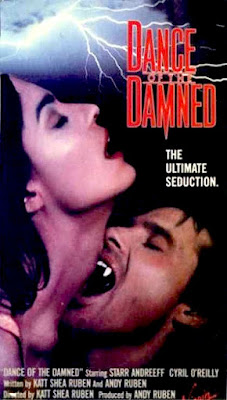 Dance Of The Damned
Release Date: April 19th, 1989
The best vampire meets stripper movie of all time! Seriously, writer/director Katt Shea (Poison Ivy, The Rage: Carrie 2) crafts an off-beat, low-key kind of film here. One that might require some patience, but I felt it payed off as I got something unexpected out of the whole thing. I actually really cared about it's characters. 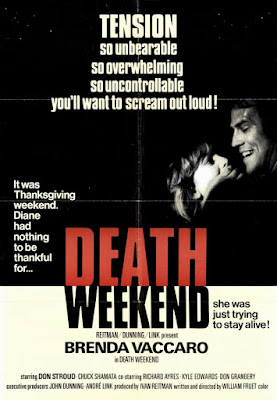 Death Weekend
Release Date: March 4th, 1977
Death Weekend (AKA: The House By The Lake) is that kind of 70's horror film that really doesn't exist anymore. These are grown ups in jeopardy, and the film is very well played by all. Especially Don Stroud as the lead baddie. He's creepy, but also strangely magnetizing. You never know what he's going to do next. 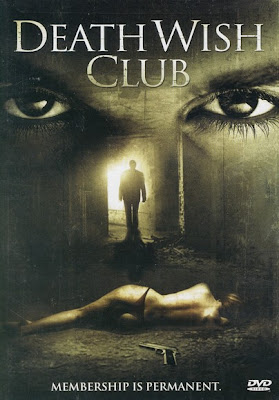 Death Wish Club aka: Carnival Of Fools
Release Date: 1983
Penned by Philip Yordan (El Cid, Johnny Guitar) there is no other film like Death Wish Club. While a segment of this film was used in a 1985 horror anthology entitled "Night Train To Terror" it's the entire film that you have to see to believe. This is utterly bizarre stuff. But for me, supremely entertaining. Once you meet Greta, you'll never forget her. "I'm a fish! I'm a fish!". 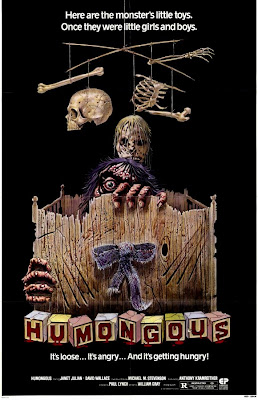 Humongous
Release Date: June 11th, 1982
Marred by a botched dark video transfer by distributor Avco Embassy, Humongous never really got the attention it deserves. This creepy Canadian production is heavy on the atmosphere and has some pretty likable characters not usually found in similar slasher films of the time. Written by William Gray and Directed by Paul Lynch (both of Prom Night fame) Humongous may be too dark in some of it's later sequences, but it burns brightly in my heart. 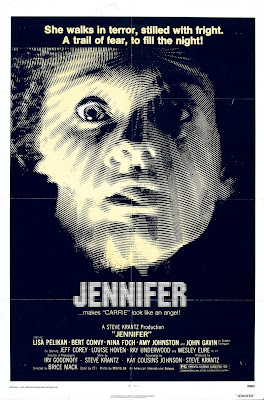 Jennifer
Release Date: May 13th, 1978
Jennifer was released in 1978 to squarely conjure audience's memories of Carrie (a shy red head with unique powers that come in handy when dishing out revenge) but it remains one of the more interesting and lively rip-offs. Star Lisa Pelikan is a unique beauty and she has a lot more gumption than you'd expect. Plus it has a theme song. Boy am I a sucker for a movie with a theme song. 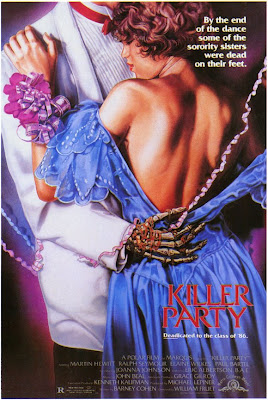 Killer Party
Release Date: May 9th, 1986
April Fool's Day was the setting for another horror-comedy in 1986, and this one has really stuck with me ever since first catching in back in good old '86. Director and horror film vet William Fruet (Funeral Home, Death Weekend, Spasms) was uninterested in making another throwaway slasher, so he creates one really wacky hodgepodge here. It's kind of a horror movie sundae or banana split. Eat some up and enjoy. 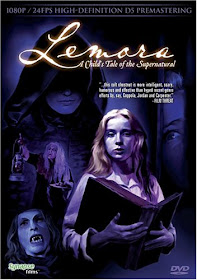 Lemora: A Child's Tale Of The Supernatural
Release Date: April 30th, 1973
Lemora is a movie unlike most with a unique vibe and fairy tale gone very wrong feel. It's kind of a twisted vampire movie version of Little Red Riding Hood or Hansel & Gretel, but with religious overtones and a sometime divergence into gratuitous 70's grindhouse. It's kind of awesome, actually. And really beautifully shot, too. 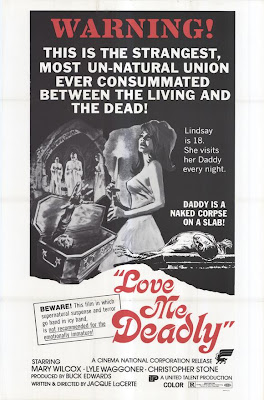 Love Me Deadly
Release Date: January 1973
Another strange film from 1973... Love Me Deadly deals with some really heavy themes like death, incest and necrophilia, but somehow the morbidity never really outweighs the film. It's also a quasi-slasher film, so perhaps that element gives it a bit of a balance. A terrifying yet strangely moving affair. 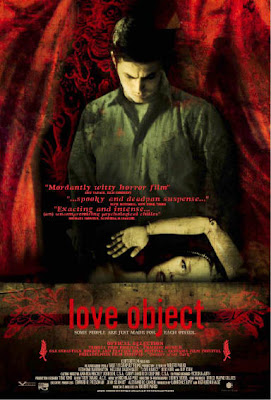 Love Object
Release Date: February 13th, 2004
Sort of a junior version of a David Cronenberg film, this picture which features a man who develops a strange attraction to a life-size "love doll" because of his inability to deal with others socially. It becomes a bizarre love triangle when a real woman does reaches out to him. The movie really excels at getting into the fractured mind of it's star, and while you're creeped out by the whole thing, you're also thoroughly intrigued. 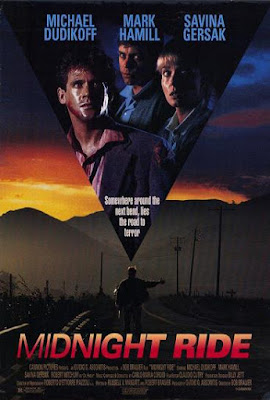 Midnight Ride
Release Date: July 20th, 1990
This Michael Dudikoff movie on the surface might seem like an action movie, but it's also a pretty nutty horror film about a crazed killer (Mark Hamill) It's a combustive mix of the two genres and I kind of loved that about it. And most bizarre of all, Robert Mitchum shows up in a supporting role! I don't think Mark Hamill has been better than he is here. He's plays a great psycho. Plus he has a fondness for, and collects eyeballs. Who doesn't like a movie about a killer eyeball collector? 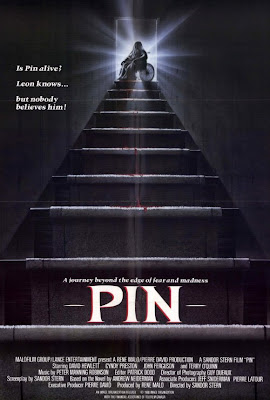 Pin
Release Date: May 31st, 1989 (Canada)
This small Canadian production succeeds in not so much giving you non-stop thrills as much as giving you a resonant emotional journey with it's characters. This is a story about a brother and sister dealing with the death of their parents in very different ways. And because you are so invested into their journey, you really care about what happens, and the horror is all the more impacting. The title character himself is the kind of creation that stays with you... Pin is another movie that you can't quite shake off. Based on the novel by Andrew Neiderman, an excellent read and highly recommended as well. 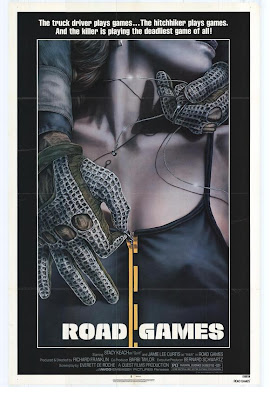 Road Games
Release Date: June 26th, 1981
I feel like Richard Franklin never really got the credit he deserved. As a protege of Alfred Hitchcock, he really understood how to deliver suspense and give you a film that has a personality all it's own. He went on to tackle that master's most high profile genre work with a sequel to Psycho, a movie that is much better than it has any right to be. Here with Road Games he crafts a movie with a mad slasher, but more interestingly a fun road movie with a very quirky Stacy Keach (his best role outside of John Huston's Fat City) and scream queen Jamie Lee Curtis. It's a joy to watch every single time. 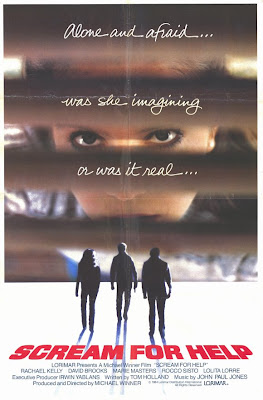 Scream For Help
Release Date: July 1984
I will never tell you that Scream For Help is a great movie, or even a good movie, but it's quite possibly one of the most hilarious (unintentionally?) and watchable films to watch in the genre. A Nancy Drew like teen gets caught up in a crazy scheme that involves her stepfather trying to kill her mother, and we follow her on her sleuthing to uncover the truth. The crazy score is by John Paul Jones (of Led Zeppelin!) and directed by Michael Winner (Death Wish, The Sentinel) the tone of this film is totally weird and almost contrary to the story and I love every single minute of it. Especially nutty is the scene where the heroine loses her virginity. Her reaction is priceless. 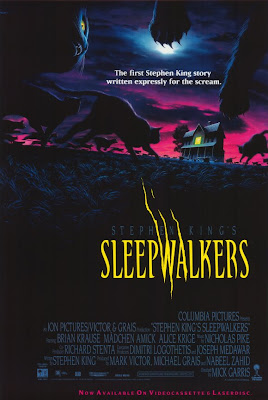 Sleepwalkers
Release Date: April 10th, 1992
The movie Stephen King wrote specifically for the screen, and not based on one of his printed works. I'm not sure what fans were expecting of King back in 1992, I think perhaps they were looking for something a bit more frightening, but I can't help but feel that Sleepwalkers is a total hoot. There's a black humor in this movie beneath every scene. It may be a cheesy affair, it is after all the story of a mother/son duo of vampiric cat hating creatures from beyond, but it's pretty fun to watch. Director Mick Garris would graduate to many future King Adaptations (currently he has 'Bag Of Bones' in production) but this is the one I keep going back to. Plus it has a scene where someone gets killed with a cob of corn. Yup! 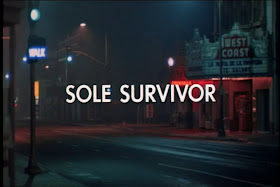 Sole Survivor
Release Date: December 1st, 1983
Director Thom Eberhardt (of the wonderful Night Of The Comet) directed this really atmospheric ghost story that hooks you once you give it the chance. Though slow moving, the film conjures up some truly haunting moments, and by the time it's over you kind of walk away from it not so much feeling you just watched some movie, but you experienced it. It didn't get much love at all upon it's initial release but over time it's found it's small audience on home video, now being compared with stuff like Final Destination. 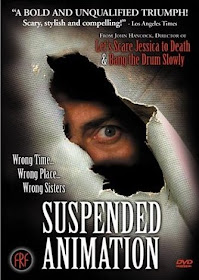 Suspended Animation
Release Date: December 25th, 2001
Director John D. Hancock made my second favorite horror film of all time, The haunting and atmosphere driven Let's Scare Jessica To Death. He stepped away from the genre for many years (surely he was burnt out on it by being fired off of Jaws 2 as director) and came back with this shot on digital video flick. Now, shot on digital video doesn't really sound promising, but I wasn't really surprised at how this picture turned out. It's structure is a bit more sophisticated than the usual film in the genre, and I found it every bit as fun as it is intelligent. John hasn't directed a film since, but I really hope he comes back. His voice is unique to the genre, but for now I have his two underrated horror tales to really enjoy time and time again. 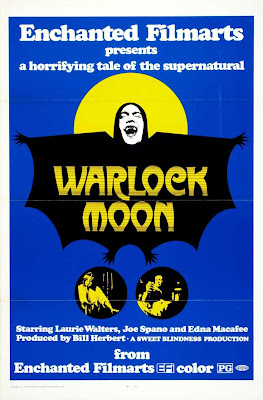 Warlock Moon
Release Date: 1975
Another strange one for ya! Warlock Moon doesn't really have a Warlock or a Moon in it, but it does have a real sense of the creepy and a great little performance by Joe Spano (of TV's Hill Street Blues) There's a scene in the movie where the lead characters are in an empty pool talking to each other, and It's kind of hard not to be mesmerized by Spano's weirdness. The DVD features another great and hilarious commentary by Drive-In god, Joe Bob Briggs.
Rupert Pupkin at 5:23 PM
Share