The lovely and talented Emily over at the Deadly Doll's House Horror Blog put together this list for your reading enjoyment. Her picks for underrated horror! 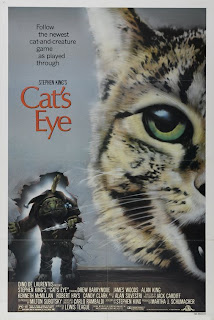 10. Cat's Eye (1985)
Like most horror fans I know, nothing makes me smile more than a well-told anthology. Lewis Teague followed up Cujo with another Stephen King adaptation, a set of three stories loosely linked by a gray feline. "Quitters, Inc." puts a meanly humorous spin on both smoking and, in a sense, laziness. "The Ledge" is a suspenseful quick tale about a jerky millionaire, but it's "The General"--starring a still warm Firestarter Drew Barrymore--that gave me nightmares. A little girl is afraid to go to sleep until she adopts a friendly stray cat...a smart move since there's a tiny evil troll hunting her breath every night. Though the stop motion goblin looks a little dated today, this segment is strangely terrifying for so many reasons: Barrymore's likable innocence, the urban legend monster-under-my-bed fear, the very idea that gross little demon is after a sweet kid, her bitchy mother. Though Cat's Eye is no Creepshow, the film is quite enjoyable in a fluffy, yet still scary way, something that's fitting of the anthology sub-genre itself. 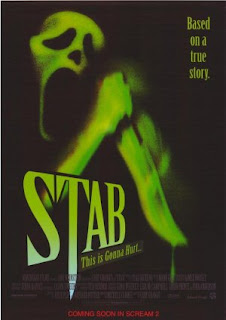 9. Scream 2 (1997)
Let's face it: this movie didn't have to be good. Following the juggernaut success of Wes Craven's '90s-horror-saving meta slasher, anything starring pretty WB refugees in dark lighting (I Know What You Did Last Summer, Disturbing Behavior, etc.) could have been bankrolled and dropped into theaters with all the finesse of a teenager discovering what breasts feel like. Kudos to Kevin Wiliamson for crafting a screenplay that was as much an ode to '80s sequels as the first film was to slashers. The film is loaded with smart self-references that introduced a new generation to what it means to be Part 2. 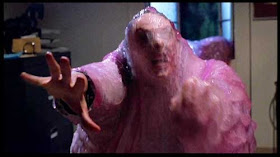 8. The Blob (1988)
Chuck Russell's 1988 remake doesn't always find its way on lists in the gutsy residue left by other titans like The Thing and The Fly, but this small town invasion easily stands as one of the very best produced in a decade rife with fluffy horror movies. Surprising plot twists (including one of the best bait & switch protagonists ever) plus an incredibly designed titular monster that's simply something else. It's not easy to be creative when remaking a popular film, but Russell (with a script co-written by Frank Darabont) nails it. 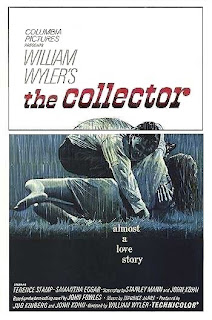 7. The Collector (1965)
Based on John Fowles's haunting novel of the same name, William Wyler's The Collector tells the tale of Frederick Clegg (Terence Stamp), a lonely lottery winner obsessed with a beautiful young art student symbolically named Miranda (Oscar nominated Samantha Eggar). Clegg wants love but is smart enough to know it might never happen. Miranda, a clever woman with various tricks up her sleeve, simply wants to live. How they interact is deeply unsettling and ultimately, incredibly sad. As the tagline says, it's "almost a love story," and really, is there 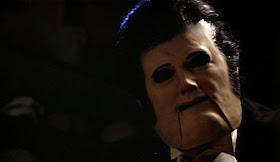 6. Tourist Trap (1979)
The definition of superior PG rated horror inappropriately tagged with a PG rating (take that, Poltergeist). David Schmoeller's 1979 mannequin movie is the definition of eerie, with a unique sound design that makes every noise something unearthly and terrifying. We may not see a drop of blood, but I dare anyone to watch a horrifying face plaster scene and not find it hard to breathe. 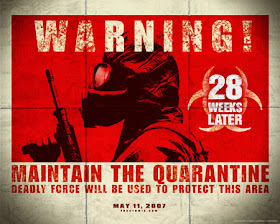 5. 28 Weeks Later (2007)
It can't be easy to sequelize a film that, by all accounts, revived the zombie genre for a whole new generation while simultaneously reinventing it with speed. Juan Carlos Fresnadillo's 2007 followup to Danny Boyle's nuevo-classic somehow manages to succeed in almost every possible way, particularly with one of the most intense opening scenes of the decade. A likable cast (including a pre-Hurt Locker Jeremy Renner) keeps you caring, while an incredible musical score elevates virtually everything onscreen. Like its predecessor, one can wax poetic about some of the themes regarding militarism, but for those that simply want a good horror film, 28 Weeks Later is a delicious treat. 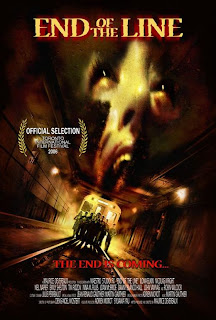 4. End of the Line (2007)
Who says there are no new horror directors? Maurice Devereaux proves such pessimists wrong with this 2008 chiller, effectively set in the subway tunnels of an unnamed city. As a crazed doomsday cult starts to stab its way through the straphangers, a few plucky survivors attempt to make it through the night. Just when you think you know where the story is going, it takes a surprise turn, saving a few more twists for savvy viewers to argue about over the end credits. Scary AND smart. 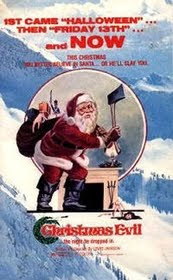 3. Christmas Evil (1980)
There are a lot of killer Santa Clauses slicing their way through the naughty list in holiday horror cinema, but it's Brandon Maggart's lonely Harry that gives the old man a genuine heart. The poor unappreciated factory worker just wants Christmas to mean something, so naturally, he follows the logical flow of donning a homemade Santa outfit and spreading joy, sometimes in the form of hand-crafted toys, other times through homicidal violence. Throughout all of it, there's a warm fuzzy undercurrent that makes this antihero a fascinating and tragic figure far more complex and lovable than, dare I say it, any tortured orphan in the better known Silent Night Deadly Night series. 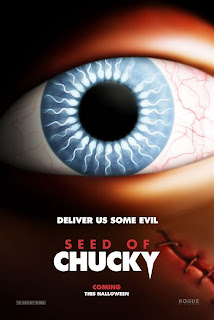 2. Seed of Chucky (2004)
Sure, Bride of Chucky boasts an infamous silhouette of fertile doll sex, but it's this horror comedy--the only film in the series thus far to be written AND directed by Chucky creator Don Mancini--that goes deep...Chucky psyche deep. Not only do we finally get Mr. Lee Ray's feelings on what it means to be a doll, we also get Jennifer Tilly gamely playing meta, Redman directing a biopic of the Virgin Mary, a winking cameo by camp extraordinaire John Waters, and the adorable sexual confusion of Glen or Glenda, the redheaded spawn of our favorite plastic couple. Sure, five films into the saga, most viewers are no longer terrified of Chucky's knife, but as laughs go, this film stands tall. 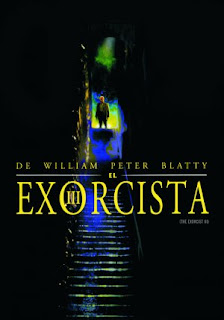 1. The Exorcist III (1990)
Underrated doesn't begin to describe novelist-turned-director William Peter Blatty's 1991 wrongfully maligned threequel to William Friedken's Oscar darling. Though the film's final act suffers from studio interference (including a forced exorcism in order to justified the film's forced title), the entire trip is rich with the pen of Blatty's novel-istic touch. As Detective Kinderman (a carryover character from the original), George C. Scott is a solid protagonist made even more interesting by his believable and amusing relationship with Ed Flanders' Father Dyer. How often do you get such playful conversations between cops and clergymen? Not to mention the film boasts one of the best 3-second jump scares ever, plus incredibly dark imagery conveyed ever so effectively through powerful dialogue. Plus, there's an old-woman-on-the-ceiling shot that makes the film actually titled Legion look even more like poo. Still need a reason to rent? The movie's so good, it rounded up cameos from Larry King, Patrick Ewing, and Fabio. Yes. THAT Fabio.

And a few honorable mentions…. 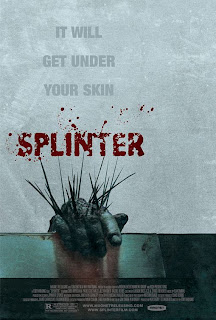 Splinter (2008)
It won't change your life, but this little-seen 2008 horror will make you nostalgic for practical effects done right. With a strong Stuart Gordon vibe and better-than-average performances (particularly by Boardwalk Empire's Shea Whigham), this quickie follows an unlucky couple on a failed camping trip as they get kidnapped by some drug addicts and worst of all, trapped in a gas station to fight off an invading parasite. The kind of movie that makes you look up its director (Toby Wilkins) and seek out his filmography, even if it includes The Grudge 3. 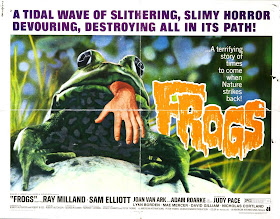 Frogs (1972)
It's a terrible movie. I know. But why, when so many OTHER terrible movies have been celebrated, does this awful nature-fights-Sam-Elliot laughfest not bask in midnight screenings? Between the pipe cleaner tarantulas, adorably misnamed title villains (they're toads) and grandly inappropriate "We're taking a stand together!" subplot involving African American characters whose deaths then don't even get a mention, Frogs is kind of a masterpiece of bad cinema. 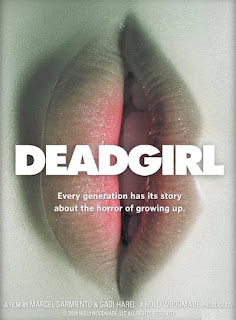 Deadgirl (2008)
Whether you were fascinated or disgusted by this 2009 indie horror, please don't deny that the filmmakers were actively exploring loneliness, loserdom, and sexual discovery in a unique and brave way. I firmly believe Deadgirl is the kind of film that will slowly develop a thoughtful audience in the next few years, an audience less interested in exploitation and zombie violence than how it's used to ask a whole lot of deep and unsettling questions. 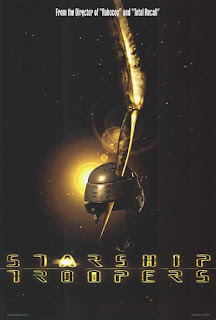 Starship Troopers (1997)
A film FINALLY receiving its earned accolades, this Paul Verhoeven masterpiece (I mean it) is so smart, it made an entire population of snide wormy critics think it was dumb. 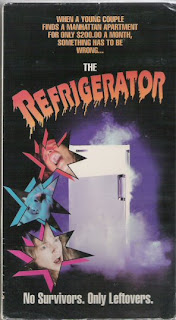 The Refrigerator(1991)
In this world, there is a film about a killer refrigerator that closes on its victims to death in its doors, then sends them to hell. Sometimes, I really am happy to be a member of planet earth. Sadly unavailable on DVD, The Refrigerator is a genuinely funny and odd find for the industrious VHS hunters braving the world of '80s horror. 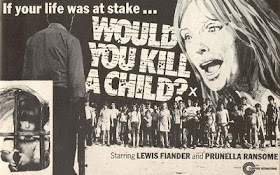 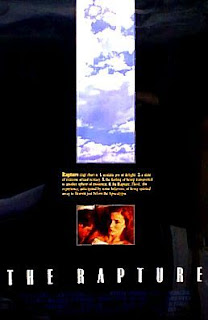 The Rapture(1991)
Not quite horror, but truly horrifying. Michael Tolkin's 1991 doomsday drama doesn't really fit any genre, but from the cold listless life of Mimi Rogers' empty telephone operator to the woman she becomes defiantly standing on the gates of heaven and purgatory, The Rapture is deeply unsettling, bravely daring, and an absolute must-see for viewers who appreciate the kind of cinema that won't let you go.